Materials: Pen & Ink on PaperSize: 150cm x 43cm Date: 2012 Commissioned by the BBC to commemorate the Queen’s Diamond Jubilee Flotilla, this image captures the hundreds of boats that sailed along the Thames in 2012 to celebrate 60 years of Queen Elizabeth’s reign. Drawn from the centre of Millennium Bridge it features many of […]

Year of the Dog 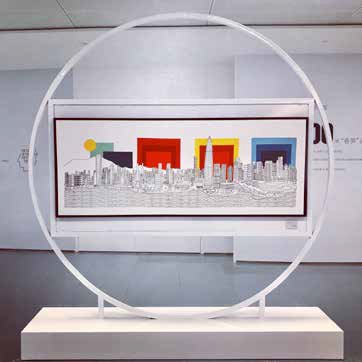 Geometric Shenzhen was commissioned by China Resources Group to mark the opening of its headquarters in a groundbreaking new 392m tower in the centre of the Houhai District in Shenzhen. The piece scans the stunning view of the bay and is centered on the China Resources Tower, which will help define the city internationally and […]

Rob was commissioned to create a portrait of Shanghai, combining the traditional with the contemporary in his depiction of the renowned cityscape. Taking the format of an old scroll, the piece marries the ancient with the modern, with the beautiful Yu Garden in the foreground set against the iconic Shanghai skyline. I love Shanghai and […]

Rob was commissioned for a client who had spent time living with their family in Austin, Texas. Rob had also spent time living in the bustling city, and had a view similar to this one looking at Downtown over Lady Bird Lake. The skyline itself has changed dramatically over the past 12 years but this […]

Rob has been commissioned to make works to order, including landscapes of Austin and Shanghai. He combines the traditional with the contemporary in his depictions of the renowned cityscapes. Taking the format of an old scroll, the Landscape of Shanghai marries the ancient with the modern, with the beautiful Yu Garden in the foreground set […]

In a 2018 visit to China, Prime Minister Theresa May presented President Xi Jinping with a state gift of two of Rob’s original works to celebrate a ‘golden era’ between the two countries. The artworks celebrated the architectural heritage of both London and Beijing through pen and ink, with bold geometric shapes and colours bringing […]